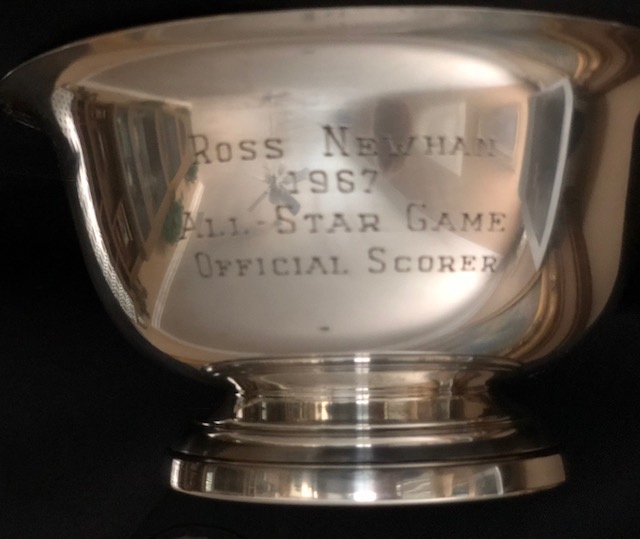 Baseball had not yet fallen into the analytics abyss when Reggie Jackson, then of the Oakland A’s, came to bat against Pittsburgh’s Dock Ellis in the 1971 All-Star Game at Tiger Stadium in Detroit. What followed would certainly have challenged the outer limits of launch angle and exit speed if they were being calculated during those pre-metric times.

Selected to the American League team only because of an injury to Tony Oliva, Jackson rifled a two run homer off the light tower on top of the third deck in right center field. I can still hear the crack of the bat and the carom off the steel tower. Sound was the only way to track it.

“The hardest ball I have ever seen hit,” said Al Kaline, an All-Star teammate, Detroit fixture and future Hall of Famer who would repeat that opinion when I chatted with him in Florida a few years ago.

Using later computer calculations, Home Run Tracker estimated 532 feet of flight, but the shot still seemed to be going up when it encountered the light tower in the few videos that get any part of it. Through almost a half century of baseball coverage the mind can cloud at times, but I rank only a bullet by Barry Bonds off Troy Percival in Game 2 of the 2002 World Series at Anaheim Stadium for falling into a comparable hard hit category. When last seen (sort of) the Bonds blast was traveling through a tunnel in the right center field bleachers–on a line.

Reggie was still in the early years of his headline and Hall of Fame career when he helped the AL end a seven game losing streak with a 6-4 victory. The results of All-Star games quickly fade but there are lasting moments. I covered 31 All-Star games, first at the Long Beach Press-Telegram and then the Los Angeles Times, and that ’71 rocket is always the first of those moments that come to mind for me.

Here are just a few others from among the All-Star games I covered, in no special order, chronological or otherwise:

1969:The great Willie McCovey hit two home runs to lead the NL to a 9-3 victory in what was the last All-Star game played in D.C. prior to Tuesday night. However, I don’t remember it for McCovey as much as a White House reception for all executives and media at which then President Nixon stood patiently and shook hands with a couple hundred people in the receiving line. Of course, Watergate planning was still three years away so he had the time.

1962: Over a four year period starting in 1959 MLB played two All-Star games a year to boost the players pension fund before deciding, as my acquaintance John Drebinger wrote in the New York Times, “the second All-Star game proved as anti-climatic as a second World Series played in Brazil.” The second 1962 game and the last of the two a year games was played at Wrigley Field with Leon Wagner of the second year Angels giving me an easy angle by going 3 for 4 with a home run to win the MVP Award. Wagner was a true All-Star that year, hitting 37 homers  107 RBI, the middle year of a three year power burst with his young team. Unfortunately, then general manager Fred Haney, over-reacting to a series of public spats after the third of those years, traded Wagner to Cleveland, prompting Wagner to say of Haney, “he could have at least traded me somewhere in the United States.”

1963, 1968: I covered the Angels and American League while working in Long Beach during the ’60s and did not see a lot of Willie Mays on a daily, pre-Sports Center basis. I caught up with him in the All-Star games of ’63 and ’68 in which he was the MVP of both. In ’63 in Cleveland he was only one for three but stole two bases, scored two runs and drove in two. In ’68 at the Astrodome, at 37, he singled and scored the only run in a 1-0 NL victory, the first All-Star game played on a synthetic surface. The 1-0 was appropriate since it was the Year of the Pitcher, after which the mound was lowered and the home run barrage hasn’t stopped.

1999: One of the truly memorable moments in my All-Star bank came in this 70th renewal at Fenway Park when Ted Williams, at 80, was driven out in a golf cart to throw the first pitch while assisted by Tony Gwynn and surrounded by dozens of the All-Stars eager to shake hands or at least be close to the Red Sox legend who died almost three years to the date later. That scene remains vivid, and it is easy to forget the performance of AL starter Pedro Martinez in his greatest year. Martinez came into his home start 15-3, struck out five of the six batters he faced and went on to finish the year 23-4 with a 2.07 ERA. Hall of Fame calling.

1983: For the  50th All-Star anniversary, MLB returned the game to its Comiskey Park birthplace. The 13-3 AL victory was far from memorable, but Fred Lynn, then the Angels center fielder, provided another easy angle when he hit the only–still only–grand slam homer in ALL-Star history off Atlee Hammaker of the Giants, part of a seven run third inning. Comiskey closed in 1990, the White Sox moving across the street to their new home.

1996: Journalists are taught early to avoid provincialism in their coverages, but at the All-Star game, where the score generally becomes secondary to an outstanding individual performance, I have to admit that I would generally be hoping for an Angel or Dodger to have a big game, making for an unforced lead or angle. Wagner in ’62, Lynn in ’83 and Steve Garvey in ’74, when he went from write in candidate to MVP, are obvious examples. Another fell into my greedy computer in ’96 when Dodger catcher Mike Piazza, batting a robust .363 at the break and playing in his hometown of Philadephia with his dad in the stands, homered and doubled to lead a 6-0 National League victory and be selected MVP. Thank you Mike, and thank you for all those terrific post-game quotes of what it meant to grow up in Philliy, rooting for Mike Schmidt and all of those other great Phillies, and have this kind of night with many of those ghosts in attendance..

1967: It is probably a stretch to suggest that the longest All-Star game almost resulted in the end of my relationship with the young lady who would become my wife. Nevertheless, through the 15 innings of a 2-1 National League victory at Anaheim Stadium–covering for the Long Beach P-T and serving as official scorer–I couldn’t help but wonder if she was still at her seat on a hot afternoon, amid a game with seemingly no end, or if she had left thinking that if this is what it was going to be like she wanted no part of it. I should have no known better. I should have known that any girl who writes a high school theme paper on Walter Alston is a true believer, and Connie Fisher has been just that, hanging in for 50 years through all the long games, the weeks with her husband on the road, mother, accountant, chauffer, carpenter, district library supervisor, so much more. And oh, by the way, Tony Perez hit a home run in the 15th inning to give the NL the win and receive the MVP award…much to Connie Fisher’s chagrin. She still argues that Bill Freehan, who caught all 15 innings for the AL, deserved the award, and she is right. After all, she has long since replaced me as official scorer.