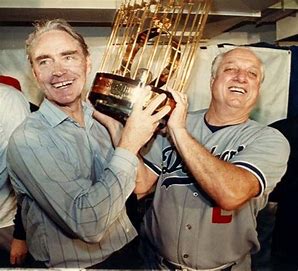 It started with a spot on his lip and removal by the surgical skin cancer procedure known as mohs. All was good except it wasn’t. First, cancer of the jaw and then of the neck. It’s been three years and not easy, but there were those 11 years as general manager of the Dodgers to help Fred Claire remember there are battles and there are battles. So, he opts to tell his story publicly and make a determined effort to repay the doctors and facility responsible for his, well, survival.

Approaching the All-Star break in another season of escalating strikeouts and decreasing hits, Claire has his focus on his own All-Star activity. He will be hosting his second Fred Claire Celebrity Golf Classic Benefitting the City of Hope on Aug. 20 at Oakmont Country Club in Glendale. Some 30 former major leaguers will participate, and his Celebration of Life Award, which last year went to heart and kidney recipient Rod Carew, will be presented to the indomitable Tommy Lasorda, who for so long was his upstairs/downstairs partner–and, yes, at times sparring partner–with the Dodgers.

“I think in any baseball relationship there are going to be disagreements,” he said by phone, “but Tommy and I have a closeness today built on 50 years of friendship going back to when Tommy was managing in Spokane and would often refer to me as his brother. I mean, there are very few people in baseball who have had the opportunity to be pictured together, as Tommy and I were, lifting a World Series trophy (from 1988) and it would be wrong to portray that as anything less than total respect, which is what I have for him today. And he’s supported our event from the start.”

That picture accompanies the blog, and it was the last time the Dodgers would receive the world championship trophy. Claire is now 82, Lasorda 90. At last year inaugural event, as part of the fund raising, an auction included lunch with Vin Scully at the exclusive Jonathan Club and a lunch with Lasorda at his second home, the open to all Paul’s Kitchen, where Chinese noodles replace the pasta. The event grossed $225,000 for the head and neck divisions of the City of Hope. Part of this year’s proceeds will also go to the thyroid unit as Claire’s gift to the memory of the late baseball executive Kevin Towers, with whom Claire said he shared many texts and phone calls as Towers’ strength ebbed through what would be his final year.

“It’s all about the science of medicine,” Claire said. “I think we all have reasons to be thankful in one way or another.”

That spot on his lip was removed in early 2015. Claire said he never thought much about it again even when he began experiencing severe jaw and head pain in mid-summer 2016.

“I had always been a runner, often six miles a day no matter the season or where I was,” he said. “That pain literally knocked me to my knees.”

The ultimate discovery was that cancer had attacked a nerve on the left side of his jaw and that the lip procedure of more than a year earlier had not removed all of the carcinoma. Claire had surgery in August of 2016 that included removal of 28 lymph nodes. His scorecard included 33 radiation treatments and seven chemo treatments. As a sportswriter before initially becoming the Dodgers’ public relations director he couldn’t help but keep score. He emerged doing well, looking only ahead, until a tumor was discovered in his neck a year later. Surgery and radiation were now out. Claire said he began immunotherapy in which his which blood cells were stimulated to fight the cancer.

“I now have a scan every three months,” he said, “and they’ve been clear. Thankfully, we go on.”

Life is a series of snapshots, and the last three years can be reduced to a matter of minutes if needed for an interview, but it’s been day to day, his and wife Sheryl’s life, he said, impacted in every way.

“I had always been blessed with great health, never took medication of any kind,” he said. “When all of this began to hit I felt I had a choice. I could withdraw or battle it with every fiber, and that’s what I decided. By going public perhaps I could help other people, make people aware of the importance of sunscreen protection for your lips and every other exposed area. We are always out in the sun in baseball and a cap isn’t enough protection. We’ve lost too many people in our business. It’s too large and too much of a sad number.”

Take responsibility! It was his credo as general manager, and there was not really going to be a choice when it came to reacting to cancer. So, he spreads the word, hosts a benefit event, and keeps an eye on the team and game that was so much his life even though–talk about irony–he is now one of the millions in Southern California who do not get the Dodgers on television because he is not with the right provider.

Nevertheless, Claire said, he admires the leadership of Dave Roberts and the work of the Dodgers front office in creating a versatile roster and finding so many nuggets on the baseball slap heap while he worries about baseball’s overall direction.

“You can’t over-regulate,” he said. “You can’t take the game away from the manager by dictating defensive strategy or anything else. Wasn’t Lou Boudreau (then the Cleveland Indians shortstop and player manager) shifting against Ted Williams as far back as ’48? Over regulating is not the answer. The answer is in having the caliber of training and coaching that will enable your team to take advantage of what the other team is doing. The basics haven’t changed but there’s too much emphasis (on launch angles and exit speeds). How about changing approach, reacting, restoring strategy.

“Maybe I’m out of touch with reality. I don’t know. I just know what I believe in in and I believe in the beauty and balance of the game, and I while I always believed in gathering as much information. as I could, you can give me all the analytics and what I want to know most of all is what my players are all about, how they’ll react no matter what’s involved . I mean, as a Dodger I had the good fortune to be surrounded by guys like Jackie, Pee Wee, Campy, Carl Erskine, Garvey, Cey, Russell, Lopes, Gibson, Hershiser..”

That’s a Halll of Fame and All-Star catalogue of players. Not every general manager or former general manager can tick off a similar list. Times change, the game changes. Claire and his former organization can get a reminder of the way it was in their last World Series glory Sunday night when the MLB Network shows its production of “Only in Hollywood,” the film story of the 1988 championship year. For Claire and Lasorda they also have that picture holding the trophy, and their beat goes on despite the medical hurdles.