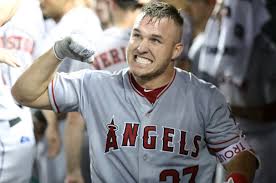 —I wouldn’t say that his second injury related sidelining has completely derailed Mike Trout’s bid for a third American League MVP Award but with about seven weeks to go and the Angels going nowhere it strikes me that he is on the outside looking in at the Boston tandem of Mookie Betts and J.D. Martinez and the Cleveland first baseman Jose Ramirez. And at this point that is probably the order in which I would rank them: Betts, Martinez and Ramirez.

—That was quite a lovely ceremony the Giants conducted Sunday, retiring the Number 25 of the home run and steroid kind Barry Bonds, whose arrogance hasn’t waned in retirement as he proclaimed, in so many words, that he considered AT&T Park as the house he built, which meant more to him than having his number retired. “Willie (Mays) didn’t play here, McCovey didn’t play here, I played here,” Bonds said, justifying his thinking. He gave no thanks to his trainer and BALCO connection Greg Anderson, who merely went to jail for him multiple times on contempt charges rather than answer questions about his client’s use of performance enhancing substances.

–As Vladimir Guerreo, Trevor Hoffman, Chipper Jones, Jack Morris, Jim Thome and Alan Trammell settle into their deserved recognition as inducted members of the Hall of Fame it remains shocking to me how over the years the Hall of Fame membership, almost all of which enjoys the pension and other rewards of having been union dues payers, has given virtually no vocal support or lobbied on behalf of Marvin Miller, the union architect. The silence from the HOF membership and his lack of support within the various forms of the veterans committee over the years (and I was a member of one such committee) strikes me as complexing. The HOF has put up union displays recognizing Miller, but he deserves induction as one of baseball’s most powerful and influential forces of the last 50 years, and he deserves the persistent support of HOF members in that regard rather than their strange acquiescence.

—It is citing the obvious to say that the extent of the price the Dodgers will possibly pay for failing to address the bullpen at the non-waiver trade deadline will now play out to a magnified and daily extent with Kenley Jansen sidelined. Nevertheless, I felt the need to join the chorus saying it, so there you are.

–The Angels have brought up their triple A manager Kevin Johnson to work with David Fletcher and other young infielders at the major league level over the final two months of the season. In turn, General Manager Billy Eppler assigned assistant Eric Chavez to manage the Salt Lake City team over the last month of the minor league season. Chavez has no managing experience but it would be wrong to not consider him a possible successor to Mike Scioscia when he is expected to retire at the end of the season. Eppler, after all, joined the Angels after serving as understudy to Brian Cashman with the New York Yankees and it was Cashman who entrusted Aaron Boone, despite no managing experience, with the valuable reins of the vaunted Yankees after firing the veteran Joe Girardi last winter. Boone has the Yankees headed toward the playoffs and a possible 100-win season, although the dreaded Red Sox have removed some of that luster with their domination in the East..

–The final weeks of  the race in the National League East feature two of baseball’s most precocious and electric rookies: Atlanta’s Ronald Acuna Jr., 20, who has 15 home runs, and Washington’s Juan Soto, 19, who has 14. Both were summoned after the start of the season. Of course, Acuna teammate Ozzie Albies, who is 21, has more than either (20), but used up his rookie eligibility last year when called up for 57 games.

–I suspect that the diminution of Shohei Ohtani’s two way glamour will cost him the AL rookie award in competition with the Yankee tandem of Miguel Andujar and Gleyber Torres.

–The St. Louis Cardinals have pretty much clinched the 2018 Call-Up title. Eight players have made their major league debut with the Cardinals this year. First baseman Patrick Wisdom, 21, became the eighth Sunday, collecting his first hit in his first at bat, an infield roller of about 20 feet that will be remembered as a line drive smoked to the outfield.

–Among other memorable first hits: An opposite field double by San Diego’s David Newhan off Oakland’s Tim Hudson (one of three Newhan hits in his starting debut) and a home run by Newhan’s former Anaheim Esperanza and Pepperdine teammate, Keith McDonald, who then, in his debut with the Cardinals, became the first player in major league history to homer in his first two at bats.